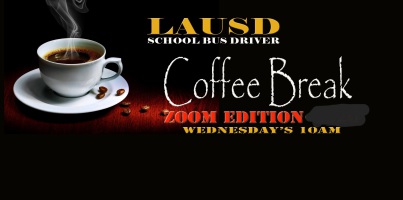 Get the Latest and Greatest news right here!

WE'RE STILL GOING STRONG.  EVERY WEDNESDAY AT 1000 UNTIL THE LAST ONE LOGS OFF

Have you ever missed out on going to the coffeebreak weekly retiree gathering at McDonald’s? Well whatever your reason, worry no more, you now have the opportunity to participate and visit with old friends and reminisce via this new platform “Coffeebreak Live”.

Give it a try, we get together every Wednesday  at 10 o’clock via zoom.

The link information is below. So gather your favorite breakfast, brunch or drink ? and just login to chat with some familiar faces and say hello. We hope to see you there.

As for the technologically challenged, DM us (that’s Direct Message) us via Facebook Messenger and we’ll do our best to get you linked in.

Our hearts and prayers go out this morning to Jesse guest in Lithonia Jones, mother and sister of former driver Jamie guest. Jamie earned her wings this morning. May she rest well with the father.

Our sister Sharyl Altom is in need of our love and support.  Please reach out as she bears the loss of her beloved child Anthony.  May he rest eternally in the arms of GOD the Father.

As our prayers went up, the Lord responded by bringing his child home with him at 2:30 this morning. Our beloved friend Demmer Brooks has earned his wings and has gone to be with his ever so loved mom and dad. The family thanks you so much for your prayers and they ask at this time that you please allow them time to grieve their loss and refrain from calls or texts at this time. All information can be received via this Facebook website or retiredsbda.com. The  contact person designated by the family is Jacqueline Elliott, she will convey all information regarding services as it becomes available. Demmer’s medical condition surrounding his death will remain private, just know that his soul is at rest and continued prayers for the family are needed as they lay yet another family member to rest.

Mattie L. Swaine; mother of William Gardner are as follows:

Family,
It is with a heavy heart that we come to you ,to let you know that our own ABS Nicole Johnson lost her son this week. Please keep Nicole and her entire family in prayer. He is also survived by a wife and 3 beautiful children. The effectual fervent prayer of a righteous man availeth much.

It is with a heavy heart that we share with you the homegoing of our beloved Sena Pierre Guidry. Any further information received will be shared. Please keep the family uplifted in prayer??

Coffee break extends its heartfelt condolences to the family of Johnny Leasseais who made his transition this week.  Please keep his wife and family uplifted in prayer.

On August 4, 1995, Walt Young retired from the Los Angeles Unified School District having served the district’s students for over 31 years. Walt always had a smile on his face and offered words of encouragement to his fellow employees. In 1978, Walt met and married the love of his life, Marilyn, who also retired from LAUSD transportation.

Walt inspired many of us in transportation, mentoring, encouraging everyone to promote, and wrote superb references (they used to be called tracers in the day) for candidates. In the late 1970’s, Walt was selected to conduct the critical interviewing and hiring of hundreds of drivers for the district’s mandatory integration/desegregation effort.

Walt was the “go-to” person for challenging projects and difficult logistical “high visibility” transportation planning. Special projects Walt worked on included the Special Olympics, Teach for America summer training institutes, and, most notably, our country’s 200th birthday celebration with an extravaganza held at the Los Angeles Memorial Coliseum. Walt developed and executed a plan that transported 100,000 LAUSD students representing EVERY school (approximately 650 schools in 1976) in the district for that event held in the evening.

Together, Walt and Marilyn were highly active members of the St. Cross Episcopal Church and served 20 years in various leadership capacities. If you would like to donate in Walt’s honor and memory, please address your donation to the St. Cross Episcopal Church – Youth Pilgrimage, 1818 Monterey Boulevard, Hermosa Beach, California 90254. Walt will be forever missed - - but never forgotten.

Prayers are being asked for our brother Kevin Simon who just lost his brother Elliot Simon. Reach out to him as he mourns the passing of his dear brother. May he rest with the angels.